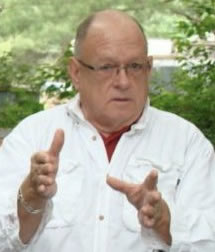 Larry Connor was born in Kalamzoo and graduated from Richland High School in 1963. He earned three degrees in entomology from Michigan State University and was hired as Extension Entomologist in Apiculture at The Ohio State University in 1972. In 1976 he was hired by Chuck Dadant of Dadant and Sons to run a new bee breeding program located in Labelle, Florida. Called Genetic Systems, Inc. this firm had two missions: to produce breeder queens for the Starline and Midnite hybrid bee programs (established by Dr. G.H. “Bud” Cale, Jr), and to mass produce instrumentally inseminated three-line hybrid bees called the Cale 876 Hybrid.

Connor left Florida late 1980 and lived in Cheshire and New Haven, Connecticut. In 2007, due to pressure of travel, he relocated to Kalamazoo and continues to write books and publish for Wicwas Press as well serve as a monthly columnist for Bee Culture Magazine and the American Bee Journal.

In huge demand on the beekeeping speaking circuit, Connor travels widely to speak at beekeeper meetings. He also conducts workshops on queen rearing and bee breeding, honey bee microscopy and related topics. Since childhood Connor has a strong interest in photography. He continues to expand his collection of images of bees, beekeepers and bee flora.